10 Things To Do In Austria

Often known for the musicians and films it inspired, Austria mixes quaint Alpine charm with abundant opportunities for arts and culture, set against a sweeping Sound of Music landscape. The capital, Vienna, beckons with its rich musical history, plentiful cafes, and emphasis on the arts. A walking tour through the city reveals a mix of architectural styles, from Gothic to Renaissance to art nouveau, which serve as testament to Vienna’s ability to seamlessly blend old and new—St. Stephen’s Cathedral is a must-see sight, with its fairy-tale appearance. In the city center sits Wiener coffeehouse, where artists and thinkers such as Beethoven, Sigmund Freud, and Gustaf Klimt have all assembled masterpieces while eating apfelstrudel and sipping famously thick hot chocolates. If music is on your mind, a nighttime visit to the Schonbrunn Palace or the Opera house shows the immortality of classical tunes. The smaller city of Salzburg, the picturesque birthplace of Mozart, is just a three-hour trip away. From Salzburg—with its river cruises and fortresses—the mountain landscape of Bavaria unfurls. Many tours take travelers through the valleys, with visits to salt mines, wine tastings, and bicycling; and nature is a year-round option, with ski opportunities in the winter and hikes in the summers. And many visitors to Austria opt for a train trip through the country to see the imposing Austrian Alps, deep lakes, and idyllic villages in one of the world’s happiest countries.

Founded in 1752 as a menagerie by Franz Stephan, Tiergarten Schönbrunn, or Vienna Zoo, is the oldest zoo in the world. It houses some 750 animals of all shapes and sizes; the most recent arrivals to excite crowds were giant pandas in 2003 although lemurs, armadillos and baby Serbian tigers spurred plenty of interest in 2006. Thankfully most of the original cramped cages have been updated and improved, but the odd one still remains.

The zoo’s layout is reminiscent of a bicycle wheel, with pathways as spokes and an octagonal pavilion at its center. The pavilion dates from 1759 and was used as the imperial breakfast room; it now houses a fine restaurant (so you can feel regal, too). Feeding times are staggered throughout the day – maps on display tell you who’s dining when. 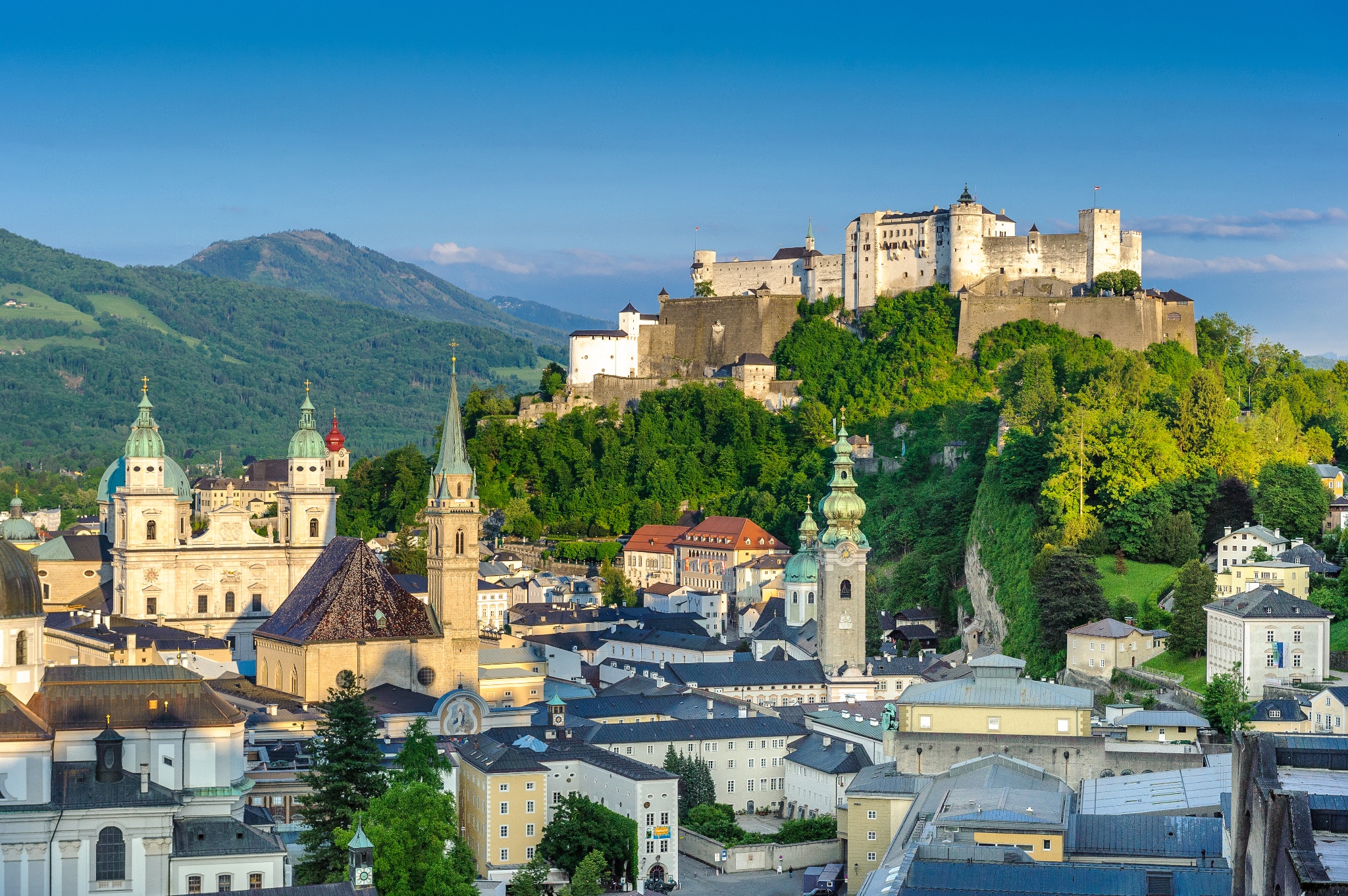 The fortified castle was built in 1077, from its lofty position protecting Salzburg, with cracking views of the surrounding countryside. Take a guided tour around the palatial state rooms, Gothic torture chambers, lookouts and museum collections. Keep an eye out for more than 50 examples of the castle’s symbol, a regal lion holding a beetroot – or is it a turnip?

Until the late 19th century the Danube River, or Donau Kanal, was unregulated and formed a 5-mile (8 km) wide wetland which regularly flooded nearby villages around Vienna. In 1870 the river was dammed and a new river channel formed for shipping. The mighty river continued to flood periodically and after 1972 a new flood-control project was started. This resulted in the creation of the Danube Island and Danube Canal or Little Danube, which runs past the old town. Both are now popular as picnic areas. In June, the annual Danube Island Festival attracts over three million visitors. In summer, the Viennese flock to the Old Danube to swim, sail, row, paddleboat and even surf! Okay, so that’s in a wave pool but there are still three surf and sail schools, plus beaches including a nudist area. Something for everyone.

In the 1980s travelers flocked to these popular rock and roll-themed cafes to collect iconic Hard Rock t-shirts from locations around the globe. And while that trend may have passed, the upscale bar, scenic outdoor terrace and huge live entertainment space still at Hard Rock Café Vienna still attract plenty of visitors to this historic city.

Travelers can saddle up to the bold art deco bar and sip on signature cocktails before settling in to one of the space’s cozy tables for a meal that blends typical Hard Rock fare with more traditional, hand-crafted local food that’s always made from scratch. The restaurant’s walls are decorated with an impressive array of musical memorabilia, which includes international superstars as well as local legends like Christina Sturmer and Parov Stelar, which means this place stays true to the Hard Rock vibe. 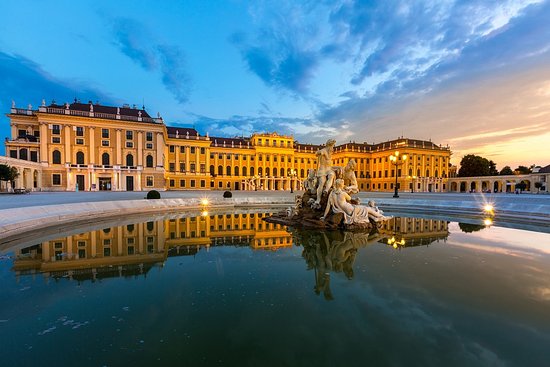 Schonbrunn Palace, or Schloss Schonbrunn, means ‘beautiful spring’ and was a royal hunting park when plans were made to build a sumptuous palace to rival Versailles. Queen Maria Theresa’s architect, Nicholas Pacassi, is responsible for the eventual design of a long, symmetrical palace full of gilding and crimson displays drawing on Japanese, Italian, Persian and Indian works of art. There are ceiling frescoes celebrating the Habsburgs and 18th century furnishings. It was finally finished in 1749.

The gardens are huge and beautiful. There is a spectacular iron and glass palm house, a maze and labyrinth, and a viewing terrace. Since the end of the monarchy the Viennese people have flocked to these gardens for recreation. The palace is on UNESCO’s list of World Heritage Sites.

Lovely Salzburg’s enchanting medieval heart lies along the southern bank of the Salzach River; the Aldstadt is an enclave of winding cobbled alleyways, airy piazzas and many fine Baroque churches.

The wealth of Salzburg originated in the 14th century when it became an independent principality ruled by powerful prince-bishops, and thanks to its glorious architecture it was designated a UNESCO World Heritage Site in 1997. The Old Town’s many highlights include the massive Baroque Salzburg Residenz (Prince-Bishops’ Palace) in Residenzplatz and the landmark Dom (cathedral), majestically gilded inside and with a dramatic Baroque façade rearing up over Domplatz. St Peter’s Abbey is a Benedictine monastery with a fine, frothy rococo interior and a gastronomic treat in its cellars; Stiftskeller St Peter is one of Salzburg’s oldest restaurants.

Salzburg’s Cathedral, or Dom, is a restrained exercise in classic Italian Baroque, topped with green bronze domes. Mozart was baptized here, and the building was completed in 1628.

Highlights include the light-filled atrium and dome, the crypt with its Romanesque foundations and tombs, and the statues of angels surrounding the altar. The Cathedral Museum tells the history of the Cathedral’s construction and artworks.

The House of Habsburg was one of the most important royal dynasties in Europe and ruled Austria for six centuries. Through prudent marriages they managed to also gain Spain, Hungary, parts of France and many other lands. They built many fine churches and residences and rarely finished any of them. The Hofburg was the Imperial Palace until 1918, although strictly the Habsburg dynasty had died out and been succeeded by another by then. The palace remains the center of government for Austria but these days the occupier is a democratic republic rather than kings and queens. The palace is an amalgam of eras and styles, much of it rich 17th and 18th century Baroque. Don’t miss the Renaissance wing Stallburg where the famous dancing horse, the Lipizzaners, are stabled.

Staatsopera, the Vienna Opera, began in the early 18th century. Since then it has continuously produced performances every year. The building was opened in 1869, part of Franz Joseph’s expansion of Vienna which has left such a magnificent legacy of grand buildings in the city. There are guided tours, or, better still, attend one of the 300 performances held every year in an every changing program.

A visit to the new Viennese State Opera Museum can be combined with a guided tour of the Opera House. The museum has photos, costumes, playbills, models of stage sets and information on every performance of the last fifty years.

The two Baroque palaces were built in the 18th century as a summer residence for Prince Eugene of Savoy. They are known as the Upper Belvedere – full of huge rooms for entertaining – and the Lower Belvedere – the former living quarters – and are set in huge and magnificent gardens. They are considered to be the best Baroque palace in the world. The Upper Belvedere is now a gallery showing Austrian art from the Middle Ages to the present day, including the world’s best collection of Gustav Klimt. Klimt’s famous golden The Kiss is here. In The Orangery next to the Lower Belvedere houses changing exhibitions, and in the Lower Belvedere you can see the prince’s living quarters and staterooms, plus the stables.

Vin Diesel Goes Shirtless to Flaunt Beef on the Beach

Taylor Swift Opens up on Mom’s Cancer for First Time

Here’s Everything You Need to Know About Coronavirus

This Immune Cell Can Kill Most Cancers

Pulse Polio Immunization 2020: Why it is Necessary to Give Vaccine to Your Child